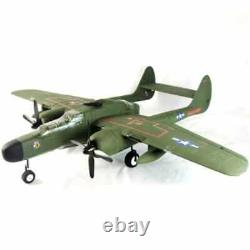 The P-61 had a crew of three: pilot, gunner, and radar operator. It was armed with four 20 mm. 79 in Hispano M2 forward-firing cannons mounted in the lower fuselage, and four. 50 in (12.7 mm) M2 Browning machine guns mounted in a remote-controlled dorsal gun turret.

It was an all-metal, twin-engine, twin-boom design developed during World War II. The first test flight was made on May 26, 1942, with the first production aircraft rolling off the assembly line in October 1943. The last aircraft was retired from government service in 1954.

Although not produced in the large numbers of its contemporaries, the Black Widow was effectively operated as a night-fighter by United States Army Air Forces squadrons in the European Theater, Pacific Theater, China Burma India Theater, and Mediterranean Theater during World War II. It replaced earlier British-designed night-fighter aircraft that had been updated to incorporate radar when it became available. After the war, the P-61-redesignated the F-61-served in the United States Air Force as a long-range, all-weather, day/night interceptor for Air Defense Command until 1948, and Fifth Air Force until 1950. On the night of 14 August 1945, a P-61B of the 548th Night Fight Squadron named Lady in the Dark was unofficially credited with the last Allied air victory before VJ Day. The P-61 was also modified to create the F-15 Reporter photo-reconnaissance aircraft for the UnitedStates Army Air Forces and subsequently used by the United States Air Force. Dynam P-61 Black Widow 1.5m twin-engined warbird has black appearance with red pattern that deserves the title of Black Widow. Two-tiered canopy design and all transparent tail-cone fully reflect the P-61 features. Both top and bottom turrets have four guns and the former can change the direction by pilots. There are bombs and auxiliary fuel tank on the lower fuselage which has excellent detail. Adopt two Tomcat BM3512A-KV650 motors to provide enough power and uses two Skylord 40A ESCs to control precisely. The counter- rotating 10.5×8 propellers effectively bring good fligth performance. 4S 26003300mAh battery can greatly extend the flight time for pilot. The four flaps design can increase the takeoff speed and reduce the landing speed, which makes the flight smoothly. Dynam P-61 Black Widow's outer wings and rear engine nacelles can be detected which makes the airplane easy to carry.

There are four navigation lights on the Dynam P-61 Black Widow. The light on the left wing tip is red and the light on right one is green.

The two lights on the landing edge of the wing are white. Pilots can understand the location and working direction of the airplane during the night flight by these lights. Multiple configurations are provided to pilots. PNP configuration includes the airplane, servos, ESCs and motors. Based on the PNP, RTF adds the transmitter, receiver, battery and charger, and RTB adds the stabilization receiver.