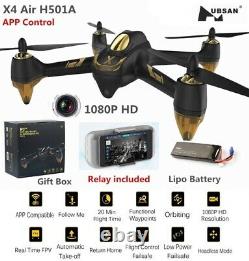 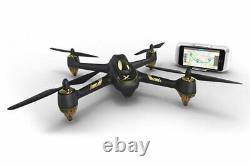 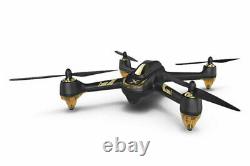 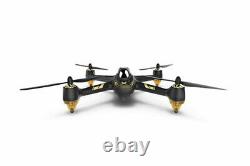 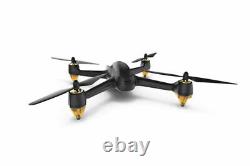 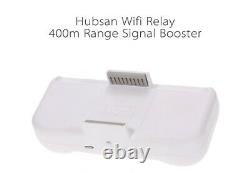 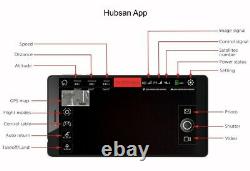 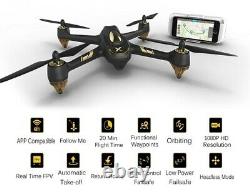 What really sets the H501A X4 Air Pro apart from its rivals is its impressive array of features, some of which are normally found on much more expensive models. The orbit mode, follow me mode and GPS waypoints coupled with the 1080P HD camera allow for some stunning aerial photography and videos, the high capacity battery and altitude height adjust mean is can give flight times of up to 20 minutes. The intelligent low power failsafe mode will automatically determine whether to automatically land or return to home depending on the amount of power it has left. Included with the H501A is a Mobile Wifi Relay unit which when used in conjunction with your smartphone extends the signal and FPV live streaming video range to 400 metres as well as improving signal quality for stable operation. The relay unit incorporates a holder for your smartphone and has it's own internal 2600mAH LiPo battery.

Hubsan H501A X4 Air Pro Features. Mobile Wifi Relay range extender. Charging time: about 210 minutes. The Hubsan H501A features a headless flight mode which makes flying easy and makes the H501A even easier to fly for beginners and more experienced pilots. With the headless mode the quadcopter will always fly forward no matter which way it is pointing, so you dont have to worry about the orientation of the quadcopter.

Live Streaming FPV and App Orbit Shooting. The H501A X4 Air Pro features a real time 1080p resolution WiFi video feed to your mobile device for flying and image capture. With the orbit shooting you can set a point and your H501A will fly 360 degrees around the orbit point allowing you to capture that perfect image or video. The H501A X4 Air Pro has an array of GPS flight features, you can set waypoints so the H501A X4 will fly a course you set on the map.

The gravity sensor coupled with the accurate GPS positioning help the H501A maintain a fixed position and height, all of this is controlled from the convenience of your IOS or Android device. The H501A X4 Air Pro is APP driven in this smart device connected world and not supplied with a Transmitter/Handset. The optional transmitter allows the H501A to be flown in a more conventional way. Remote Control Distance: 400 Meters with mobile wifi relay. APP control via IOS or Android devices. Battery for H501A: 7.4V 2700mAh LiPo. Flight Time: Up to 20mins. What's Included In The Box. 1 x Hubsan H501A Quadcopter. This Model is compatible with the UK/European GPS service, some grey imported units may not be.