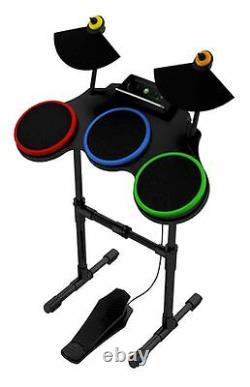 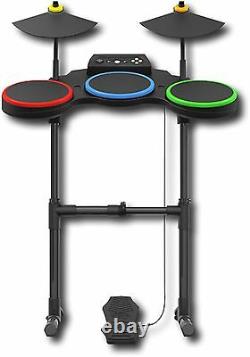 XBox 360 Guitar Hero World Tour Band DRUM KIT SET drums BAND warriors of rock. [WT19-19] For sale is just the Wireless Drum Set Kit for the Microsoft XBox 360 system. This is the sweet drum set that was released with Guitar Hero World Tour and Band Hero but also works with Warriors of Rock, Guitar Hero 5, Metallica and so on also compatible with ALL Rock Band games including but not limited to: 1, 2, 3, Beatles, AC/DC, Green Day, Lego... This listing is for the Drum Set assembly ONLY.

Sorry there is no game or other instruments. We do sell the full bundle as well if your looking for the set. Drum Set is fully tested and guaranteed.

Both the drum pedal cable and drum cymbal cables have been refurbished with new cables!! You will get the following. XBox 360 Wireless Drum Kit Set. 2 Cymbals with Lug Nuts.

Please allow 24 hours for your tracking information to update and show movement/scans. Your satisfaction is our #1 goal! Loot Hive is a small business in Minnesota that employs 30 awesome people. They work very hard to get quality products to you quickly.